For quite some time now, translators as well as SAP users have voiced their dislike of the editor that transaction SE63 offers for long text translation, that is translating SAPscript-based long texts. While SE63’s editor for short texts is quite powerful, its counterpart for long texts is bare bones at best. We’ve made a tool to change all that.

Translation Re-Use – Not an Option

The main criticism that is often leveled at the long text editor is “…it does not even offer translation memory integration”. And indeed, if you have translated a sentence in a smartform or an F1 help text, you may, a few objects down the road, come across the same sentence again, and have no way to reuse your old translation or any translations entered by other translators. This means that translation takes a lot longer than it needs to, and is quite a bit more expensive. 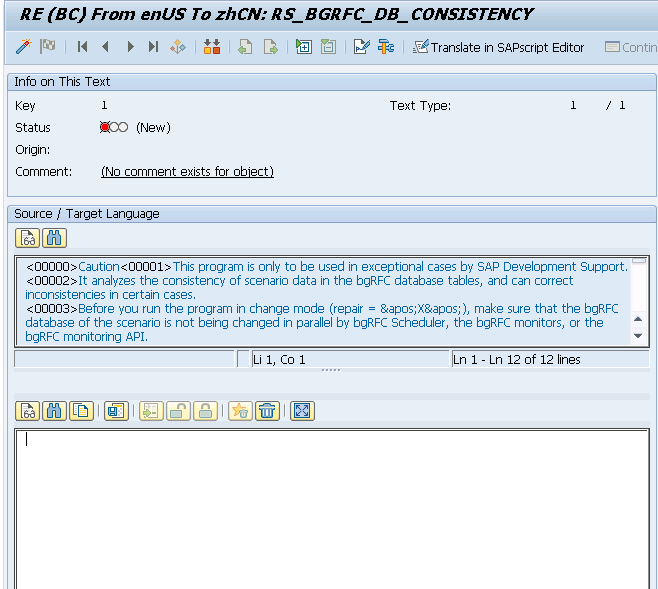 The SAP Standard editor does little to make a translator’s life easier during long text translation.

Short texts, on the other hand, such as text elements and data element texts, have a fairly nifty translation memory system called the Proposal Pool. This tool is tailored specifically to SAP translation (I wrote about it here). But guess what – all the translations from reports, data elements or other short texts are not proposed for reuse during long text translation either. This often makes it hard to keep the terminology consistent between the user interface texts and the F1 help, for example.

Our SAP add-on tf-externalize solves that problem by exporting SAPscript-based long texts to the localization interchange format XLIFF. This XML-based format has been an industry standard for some time. Exporting the long texts enables you to translate them using translation industry tools such as SDL Trados Studio, where translation-memory integration is part of the standard functionality. This allows for much speedier, and much more cost-efficient translation of these texts. And the quality is better too, since any existing translations matching new texts will be proposed to the translator at the time of translation. And past translations are fully searchable as well. 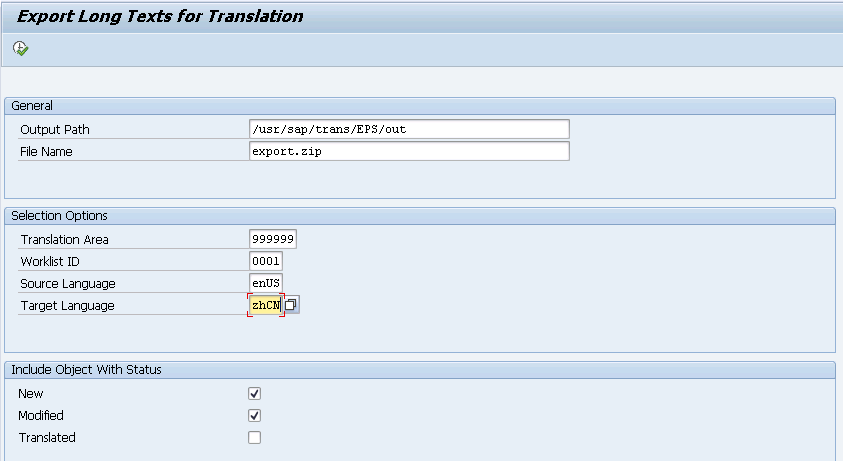 If an experienced SAP translator working on long texts has access to the SAP system the texts were exported from, for example because they are already working on short texts in transaction SE63, they can still take advantage of the resources available there. This is due to the fact that all the metadata of the original long texts objects is preserved in the downloaded files. So when the translator is translating a F1 help text for a report, for example, they can simply call up the translation object that contains that report’s text elements and match their translations to those of the short texts.

The add-on itself consists of two ABAP reports, one for exporting long texts and one for importing the translated XLIFF files. All SAP languages are supported, and you can choose to include already translated long texts in the export, for example for review purposes – although they are excluded by default. It is also fully integrated into the SE63-based workflow. After the export, the report outputs the number of new, modified and translated lines of the objects that were just exported. These numbers follow the same logic as the translation statistics that are available as part of the SAP Standard (tcode SLLS).

tf-externalize also supports the fingerprint-based versioning system for long texts that SAP introduced with Netweaver 7.4. This ensures that when a long text is changed in the original language by a developer, the status of the French and Chinese versions of that long text will change to modified, just as it would had the long text been translated in SE63. This fits in well with our preferred method of SAP translation: using SE63 for all user interface texts in most cases, and now exporting long texts for more consistent and faster translation.